It is with extreme pleasure that I get to work with the owners of Superior Motors in Seattle in getting their website into shape. Their previous web person moved out of the country and left the site with many issues that were seriously affecting their ability to promote their inventory and new additions.

We were able to isolate the elements that were conflicting and causing certain functions to break, repaired them and then introduced various new or improved elements into the site. The first order of business once the site was running properly was to connect them to the various social media marketing venues such as Facebook and Twitter. Now, each new listing is published across those networks and then promoted through those channels. The result has been a large increase in total traffic and sales.

The next major change was to replace all the contact forms with the more powerful and versatile Gravity Forms in order to create more sophisticated forms for everything from general inquiries to credit applications. Another major step was to move the hosting to our WordPress optimized servers which resulted in huge improvements to page load times.

The site uses a special theme specific to car sales. Therefore, we created new graphics and aesthetics throughout to ensure that the site looked on the same professional level as their sales and service staff.

Superior Motors specializes in the sale and service of luxury and exotic cars such as BMW, Porsche, Volvo, Mercedes-Benz, and more. They can also find you a car that meets your specifications. 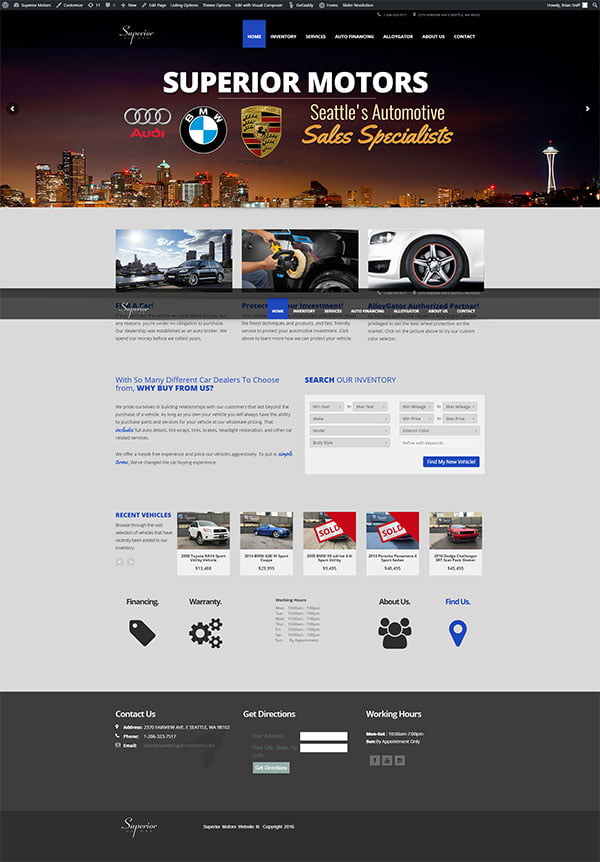